If only I had known then what I know now! My first experience at triathlon was in May 2011 at Clemson University. It was a sprint distance race consisting of a 750 meter swim, 11 mile bike and a 3.1 mile run. I had trained for months doing what I “thought” would get me prepared for Clemson with no particular structure, borrowed a bike which I had never ridden until one week before race day and had never swam in open water in a race like atmosphere with surrounding athletes! Race day was upon me and nerves were out the roof. Hmm, wonder why? I was so nervous that I did not eat before the race. First mistake! I set up transition based on what I had learned off YouTube videos and felt good about my setup. I started with the novice group instead of age groupers. Smart move! Surprised myself with a solid swim and came in 4th in about 20 novices. Next… holy transition! What a disaster! Will get to this later, but always a good idea to know what general direction your bike is based on which side you are coming into transition. After about 2 minutes, I finally found my bike and got my ride on. I had a good ride with no major catastrophes. Proceeded to transition 2 where I was to get off my bike and precede the run. What? You’re supposed to practice bike to run transitions? Also, still haven’t eaten all day…. Couldn’t feel my legs until about mile 2 but was able to finish out the run and become a first time triathlon finisher. Fast forward to 2016 – dozens of triathlons under the belt, 2x Ironman Finisher and Coach for Tri Coach Georgia and I have learned a thing or two and would like to share Coach L Dubb‘s top tips that I hope you will find beneficial before taking on your first triathlon.

Age groupers – Division in triathlon that is categorized by gender and age such as Male 35-40. There are also divisions such as novice, Athena’s, Clydesdales, open.
Body Marking – There will be a body marking station where volunteers will write with a magic marker your race number on both upper arms, lower calf and usually both top thighs.
On your left – Means someone behind you is about to pass on your left, most commonly heard on the bike. When this happens, move to the right and let them pass.
T1 and T2 – These are the transitions areas that we talked about previously. T1 is the first transition from the swim to bike. T2 is the second transition from the bike to run.
Aero Bars – attach to handle bars or stem of bike that allow you to rest your elbows and forearms on the pads and remaining in the aero position.
Sprint Distance Tri – 250-750 meter swim, 10-15 mile bike and 3.1 mile or less run
Olympic Distance Tri – 0.93 miles or 1600 yard swim, 22-26 mile bike, 6.2 mile run
Half Distance Tri 70.3 – 1.2 mile swim, 56 mile bike, 13.1 mile run
Full Distance Tri 140.6 – 2.4 mile swim, 112 mile bike, 26.2 mile run
Mass Start – All athletes tread water and begin at the same time instead of in waves.
Wave Start – Athletes are separated in waves based on divisions and male vs. female.
OTB – Off the bike. Commonly used in training when referring to a run OTB in regards to a brick.
Buoy – Floating buoys that are colored that allow swimmers to see where they are going in a race and when to turn. Usually red, yellow or orange.
Timing Chip – The chip that times your whole race and attaches to your ankle strap. To be worn from start to finish. 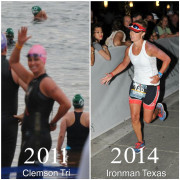 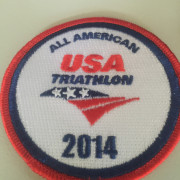 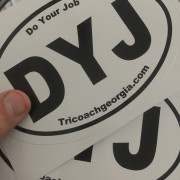 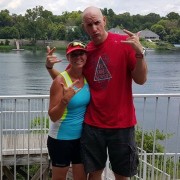 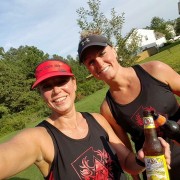