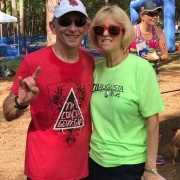 Triathletes are people too, and they have trials and tribulations. Some have more challenging ones than others but each of them have something to overcome. The coaching staff at TCGA wanted you to learn about one special situation that a lot can be learned from.

Grandmasters athlete and honorable Reaper Team Member Rick Pruett is a wonderful man and a strong triathlete. You always get some good words of wisdom and solid results from him at races. Behind each good man oftentimes is a good support system, many times consisting of a spouse. Always, right there with Rick at races was Vicki.

Vicki has been dealing with severe medical issues in the last year or so. This has been devastating and challenging for Rick. We wanted to give you a look at how she is doing and how this has changed things for him.

“Honey, I’ve got a pain in my abdomen that’s getting worse.” And so it began, on Aug. 31, 2017, we headed to the ER around midnight. What we thought was an attack of appendicitis turned out to be a kidney infection. Having only one kidney, the doctors decided to treat this aggressively and admit my wife, Vicki, for IV antibiotics. How was I to know what all this would lead to?

During the normal blood testing, they discovered Vicki had a very low hemoglobin level. So low they decided to give her 2 units of blood. The staff did some diagnostic work to try to figure out why there was a low red blood cell count, but came up with no answers. After 5 days in the hospital, the infection was under control and the blood count was acceptable. We were sent home and I thought maybe we could resume our normal lives.

Turn For The Worse

While at the hospital before discharge, however, Vicki had developed a mild headache. No big deal we thought; it was probably due to the antibiotics. Headache is a common side effect of Ciprofloxin. After getting home, the headache continued to get worse over the next few of days. A week after being discharged, Vicki stumbled and fell while walking to the bathroom.

I helped her up and asked what happened. She couldn’t quite put the words together to reply. I started thinking stroke and went thru the F.A.S.T check. That’s Face drooping, Arms raise in unison, Smile symmetrical and Talking. When I asked her to repeat a sentence after me, all I got back was word salad. It had to be a stroke so I called 911. I knew then this meant triathlon would have to take a back seat to life and I was glad to prioritize her needs, but who knew how long this was to take place?

We went back to the hospital; this time in an ambulance. After an MRI, CT scan and lots of blood work over two days, the doctors diagnosed severe migraine headaches. Based on that diagnosis, they provided some medications, she took them and we headed home on that Saturday. By Monday, unfortunately, the headache was so bad we called our primary care provider (PCP) and he got her right in.

Our PCP spent four hours examining her, getting some labs and consulting with multiple neurologists. Their diagnosis was Temporal Arteritis. They prescribed prednisone and sent her home with some optimism. Two days later, the headache had still not subsided and Vicki was bedridden. Things were getting worse not better and I was a bit freaked out!

Could Be Even Worse

The grandkids were over and they wanted to see “Gramma.” You couldn’t blame them, Vicki treated them like a million dollars. She said it was ok for them to come in to her room so they went upstairs to see her. When they said hello, Vicki looked in one direction and said hello. There was no one in that direction. She was now blind and didn’t know it!! (Cortical blindness). And now she couldn’t hardly walk either. We knew it was time for another ambulance ride to a different hospital.

At the next hospital, an MRI revealed lesions in both occipital lobes of the brain. We spent a month at the hospital where Vicki underwent numerous MRIs, CT scans, ultrasounds inside and out, lumbar puncture for spinal fluid tests, EEG, EKG, and finally a brain biopsy. All of this was because the stroke was not caused by blood clotting, but by inflammation of the blood vessels in the brain. With no definitive cause of the “vasculitis”, Vicki was discharged to go to rehabilitation.

During the month in the hospital, her vision was starting to come back but walking was a skill she no longer possessed. We went to Shepherd Center in Atlanta for rehabilitation. If you ever need rehab from brain injury or spinal trauma, this is where you want to be, so I was relieved! For 7-8 hours a day, M-F and four hours on Saturday Vicki was Doing Her Job! She made great progress and after four weeks of intense therapy her vision was back to about 50%, memory about 80% and she could walk about a hundred yards with a little support.

Vicki was discharged from in-patient therapy to an outpatient day program of intense therapy. She spent 4 weeks in this program. We had a discharge date set for Dec. 15, 2017. We had made some progress and I was hopeful of a return home with some ongoing improvements. My employer, thankfully, had been very understanding.

During the last two weeks of therapy in Atlanta at Shepherd, we noticed a gradual change in Vicki’s personality. Initially this was nothing to be concerned about the first week, but by the second week she was starting to get way too expansive, chatty, and outgoing. It was like she had a few glasses of wine, was feeling great and wanted to tell the world! It was starting to become disruptive to the therapy sessions and I was not used to this version of Vicki at all.

The doctors were thinking this might be a reaction to some of her medications and were adjusting them. Nonetheless, we decided to go ahead with the discharge plan and return to Augusta. Vicki was becoming unhappy with being in therapy everyday and she was missing her grandkids. Maybe some “grandkid therapy” would improve her mood?

Over the next few days at home, her condition became worse. From being overly happy and talkative, to agitated, to finally, violent. It was time to get back to the hospital. She was now losing her ability to walk and her vision was regressing. A new MRI revealed new lesions in the brain caused by the vasculitis. Apparently, the prednisone they were treating the vasculitis with wasn’t working.

After a week in the hospital and many more tests, we were sent home to await the results of a lumbar puncture for spinal fluid analysis. The results were inconclusive. On January 5th 2018, Vicki finally started on a drug to treat the unknown autoimmune disease that is causing the vasculitis. We are monitoring her progress in this regard at home and I have some home care professionals to help me.

It’s been a very long and frustrating journey to this point and we’re still not sure where this goes from here. Hopefully the chemo-type drug does the trick and rehab starts over and we can see more of the old Vicki and the grandkids can see their Gramma and we can live happily ever after, but I have to admit I have my doubts and it is VERY frustrating not having a clear diagnosis.

Yeah, it’s been a pretty tough 4 months. Devastating is more like it. In my early 60’s, we were planning on a fun and relaxing retirement in the near future. I was wanting to travel and to have a serious ironman training year and with the support of my TriCoachGeorgia teammates and TriAugusta club mates energy I was planning to have a go at some lofty goals as I aged up. This situation was something neither of us had in our plans. While I still worked, Vicki had just retired in May. She was just starting to enjoy being able to take off on long weekends and spending more time with grandkids.

So, how does this relate to triathlon and endurance training? While training for an Ironman, or marathon, or any activity that requires months of dedicated work, you learn a lot about yourself. And you change. If you’re going to be successful, you’re going to be doing things you don’t feel like doing sometimes. But everyday (well almost), you put in the work. You lace up your shoes, you pump up your tires, you hit the pool or lake. It seems to be physical, but there’s a huge mental aspect as well. You’re learning patience. You’re developing discipline. You’re becoming mentally tough for a long haul. You’re learning that you can go farther and do more than you ever thought possible. You’re changing in many ways.

You’re also learning that things don’t always go as you planned. Maybe you forgot your electrolytes and have to improvise. Maybe a kid got sick and you can’t get that workout in. Maybe you got sick. Either way, you’ve had to adapt, make changes and keep moving forward. Your goal wasn’t something that was going to be easy to achieve anyway. The dedication and hard work pays off.  It’s this training that will carry over into your life outside of endurance sports.

Past Ironman achievements, my team and my club have been a great help to me weathering these changes in my life the past 4 months. I know I’ve got the strength and support to keep going. I know I can adapt. Sure, it’s not what I planned or wanted but it’s something that’s not going to beat us. Don’t let life events beat you either. Do the best you can with what you have, make allowances for important things, and realize that your quality times may be limited so face your fears and take your chances when life allows.

Thank you all for the support, prayers, and for reading and asking me about things. It’s hard to keep everyone up to date but we certainly want you all to know how important you are to us. And someday hopefully soon, I’ll be back out there with you. Now, go #DoYourJob and reap the benefits for all you will face in life! 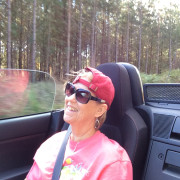 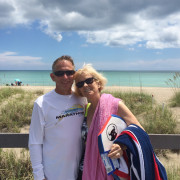 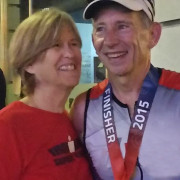